Known as a fierce tribe and headhunters, noted for their custom to reduce human heads into an orange size, the Shuar people are formed by four groups: Ashuar, Aguaruna, Huambisa and the Shuar (all these tribes belong to the Jivaroan people, but popularly are known as Jivaros). Their lands extends along the Amazon, northern Peru and southern Ecuador.

Succesfully resistered the incursions of the Inca Empire and later the Spanish conquistadores. Before the Spanish conquest, the Inca Huayna Cápac tried to conquer the Shuar people. Later, in 1549, year in which for the first time arrived a Spanish expedition in the shelters of their isolated jungle. The leader of the expedition, who was really furious, sent a letter to the Spanish King telling him: “I inform my Majesty that their town is the most insolent that I have seen during all the time that I have been travelling in the Indies and fighting to conquer it”. This brave man, who was Hernando de Benavente, arrived there with the idea of establishing a camp, was obligated by the hostile Jibaros to lease their geographic areas.

In his book, which was title The Jívaro: People of the Sacred Waterfalls, edited in 1972, the anthropologist Michael J. Harner, set the place of this tribe in the history saying: “We only know an Indian tribe of American representatives that could fight against the Spanish Empire and failed all the intention of the conquerors to dominate them: the Jibaro people.” 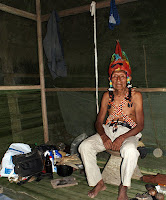 Although, many Spanish armies dominated the tribe during half century, the Jibaro people rose in 1599 in rebellion. The Spanish chronicles related that during that year, aroun 20000 Jibaro leaded by Kirrúba (Quiruba) due the Governor of Macas, representative of the Spanish colony, charged a huge tribute to the indigenous people, the Jíbaro people rose in rebellion and kill a thousand of white citizens in only one day. First, they captured to the Governor in a city named Logroño de los Caballeros, poured melted gold in his throat up to his bowels exploded inside his body and destroyed the village. Some nights later, in 25 leagues of distance, they killed most of the men in the village of Sevilla de Oro and Valladolid, as well as Canelos, Zamora and other colonial villages in the area.

Nowadays, the Shuar people are located in the area of the rivers Tigre, Morona and Pastaza in Peru, and in south Ecuador. An expedition to their lands usually requires sense of adventure and 15 days available.