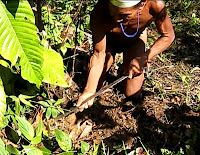 Also known as “cubé” is a plant part of the Fabaceae family that grows in the South American rainforest, used in the traditional fish by indigenous peoples of the Amazon.

Fishermen take the barbasco roots and smash them with a piece of wood. In a brook, they contain the water current in different points; then dip and shake the smashed roots in the water, releasing the venom and waiting until it works. Immediately, poisoned fish come to the surface, easy to take them with a net. Finally, fishers open the dams in the brook allowing the venom dissolves in the waters and loses its effect.

Rotenone is mildly toxic to humans and other mammals, but extremely toxic to insects and aquatic life. Fish poisoned with rotenone can be eaten this venom is very poorly absorbed by the gastrointestinal tract of humans.

Rotenone is used commercially as an insecticide, but use for fishing can be controversial, as it kills all species of fish.