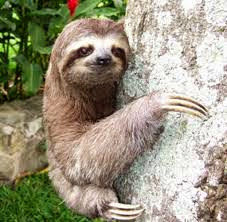 The Sloth (Bradypus variegatus), is itself a kinf of lazy in Central and South America. The sloth has grayish brown to beige skin, and it's very thick. The head of the sluggard is round, flat nose and ears not visible.

The limbs are long and lazy are well developed, his fingers are attached and end in long claws and curves.

The front legs are longer, are more developed and have more mobility than later, especially in the lazy belonging to the group of three fingers. It has about 18 teeth and body temperature varies considerably according to the environment, which are physiologically restricted to an equatorial habitat. 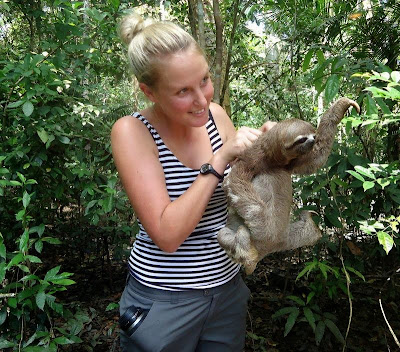 The sloths are herbivores that are adapted so the arboreal locomotion that have lost the ability to move around the floor.

These animals are solitary and very long-lived animals, moving in a slow hugging a branch and hanging upside down. There are two families which differs in being lazy tridactyle species (three fingers) or didáctyle (two fingers).

They eat the entire leaf and mix different types of leaves so they need to visit many trees and vines to get your food. Slow digestion is similar to ruminants which have a long digestive tract.