The Ayahuasca or rope of dead, is a potion of medicinal and hallucinogenic plants used as a diagnostic to cure ills. Natural and ancient medicine that concentrates the power of the jungle. 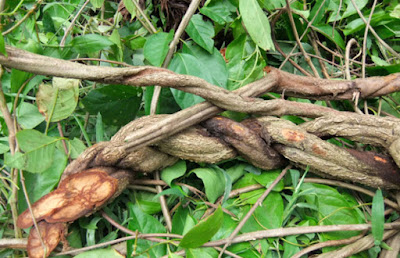 Preparation of ayahuasca in the Region of Loreto, Peru

It is known as ayahuasca of a various entheogenic beverages resulting from multiple plants decoctions. The basic component is a decoction of the vine (Banisteriopsis caapi), which property is the content of (Monoamine oxidase) inhibitors, known as inhibitors (MAOIs). It is mixed with leaves shrub of the genus (Psychotria), because of its content of (Dimethyltryptamine) (DMT).

Ayahuasca in Quechua means 'rope of dead' by its etymology “aya” (dead, deceased, spirit' and “waska” (rope, string' because in the worldview of the native peoples the ayahuasca is the rope that allows the spirit leaves the body without this die.
It is used in medical or religious rituals and in traditional medicine of native towns of the Amazon.

How the ayahuasca is used:

Ayahuasca is used as medicine, such as purifying and as a master. It is called a Doctor because cure; Master because it teaches, and Mother for it’s guidance. It gives power, knowledge and vision. 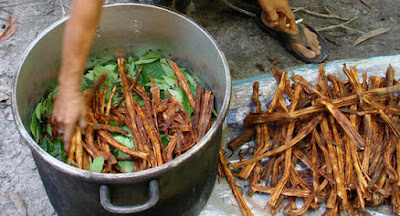 The medicinal properties of Ayahuasca are not only in the spiritual realm, but also in the physical. There prerequisites before ingestion, such as mental, physical, emotional and spiritual preparation.

The diet is essential: it must remain fasting at least 24 hours before the ceremony, it is important that the stomach is free from food as vomiting are common. You should not drink liquor, drugs, spicy, or sex with at least seven days prior to the ceremony.
Ayahuasca takes you to the magical world. It gives you what you need to give you, teaches you what have to teach you, heal you what it has to heal you. Ayahuasca is not a simple chemical relationship but a magical relationship. 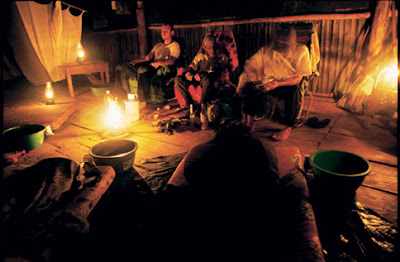 To be understood, first you have to learn feeling its dimension, and as the shamans say, using the heart and not the head.

Finally, each ayahuasca experience is distinct from the other.


Ayahuasca: (Usually pronounced/ ˌaɪjəˈwæskə/ or / ˌaɪjəˈwaːskə/), is an entheogenic brew made out of (Banisteriopsis caapi) vine, often in combination with various other plants. It can be mixed the leaves of Chacruna or Chagropanga, dimethyltryptamine (DTM)-containing plant species. The brew, first described academically in the early 1950s by Harvard ethnobotanist Richard Evans Schultes, who found it employed for divinatory and healing purposes by the native peoples of Amazonian Peru,so it is known by a number of different names.